I have a strange friendship with one of my best friends. We don’t make definite plans as much as we just wing it. Instead of, “let’s get together at my house on Saturday at 3pm,” it’s more like, “Hey, maybe we’ll do something mid-week, maybe around the early afternoon either at your house or maybe even that one park where we went to that one time.”

I know it might not work for some people but it totally works for us. We met 7 years ago in Honduras at a party at the Ambassador’s residence. She was of Costa Rican descent married to an American. I loved that we both had tons of things in common right away. We both feel like fish out of water at these official functions, but we faked it pretty well. Soon, she became my partner in humanitarian projects. We passed coffees and functions for meetings with a local director at a women’s shelter. We traded our cocktail dresses and heals for sweats and tennis shoes and hiked up to a remote village to speak to those without electricity and bathrooms.

We developed projects to help those afflicted with poverty, I worked out the details and she helped with translations. We worked like madwomen for two years, trying to better the lives of these beautiful people of Honduras. Then she moved with her husband back to the States, then Panama, and now 6 years after we met, she and I were living in the Washington D.C. area! But being part of the military and State Department community, reunions like this don’t last very long. After a year of hanging out, it was time for her to move again. After she moved out, and was in transition, she “maybe” needed a place to stay for maybe one or two nights, but maybe not. As I said, with us, no plans are definite until it happens. So in this case, it wasn’t until the day of that I found out for sure she was coming to stay for two nights.

Don’t make anything too extravagant for dinner, she pleaded. Hmm, so what should I cook for one of my best friends that’s both special and easy?

I had the perfect answer! My version of a Lebanese Mezza.

This is so yummy and easy that when I lived in Honduras, I actually taught cooking classes on how to make this meal from scratch. Today I cheated a little bit by buying roasted eggplants and zucchini and hummus at Trader Joe’s.

The first thing I ask before I prepare this meal for anyone is, “Do you like garlic?” If they respond with an exuberant “yes!”, then I’m making it. If there is even an iota of uncertainty in their voices, I’ll probably make something else.

Let’s start off with the roasted garlic. Traditionally, to make roasted garlic, you wrap whole garlic bulbs in foil, pop in the oven at 400 degrees for about half an hour. Then when cool, take a tiny knife and wiggle the sweet garlic meat out of their skins. My sister, a chef in Monterey, CA, showed me how to make it the easy way.

Take peeled garlic cloves and place in a small saucepan with olive oil. Cook at really low heat for about 15 minutes until it starts changing color. Toward the end, I turn up the heat for a minute to add a crispiness. (Use the extra olive oil to saute your chicken.) 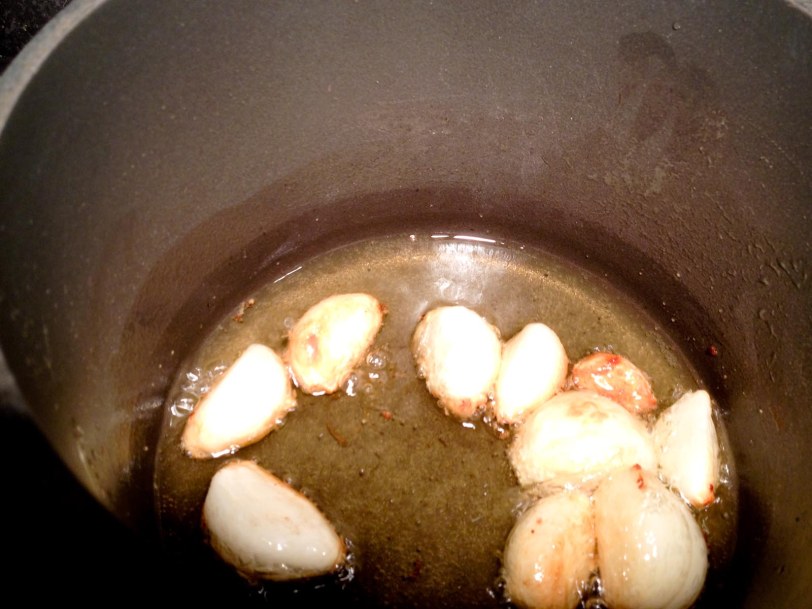 The result are sweet, crispy-on-the-outside and tender-on-inside garlic cloves that you can pop in your mouth like candy! 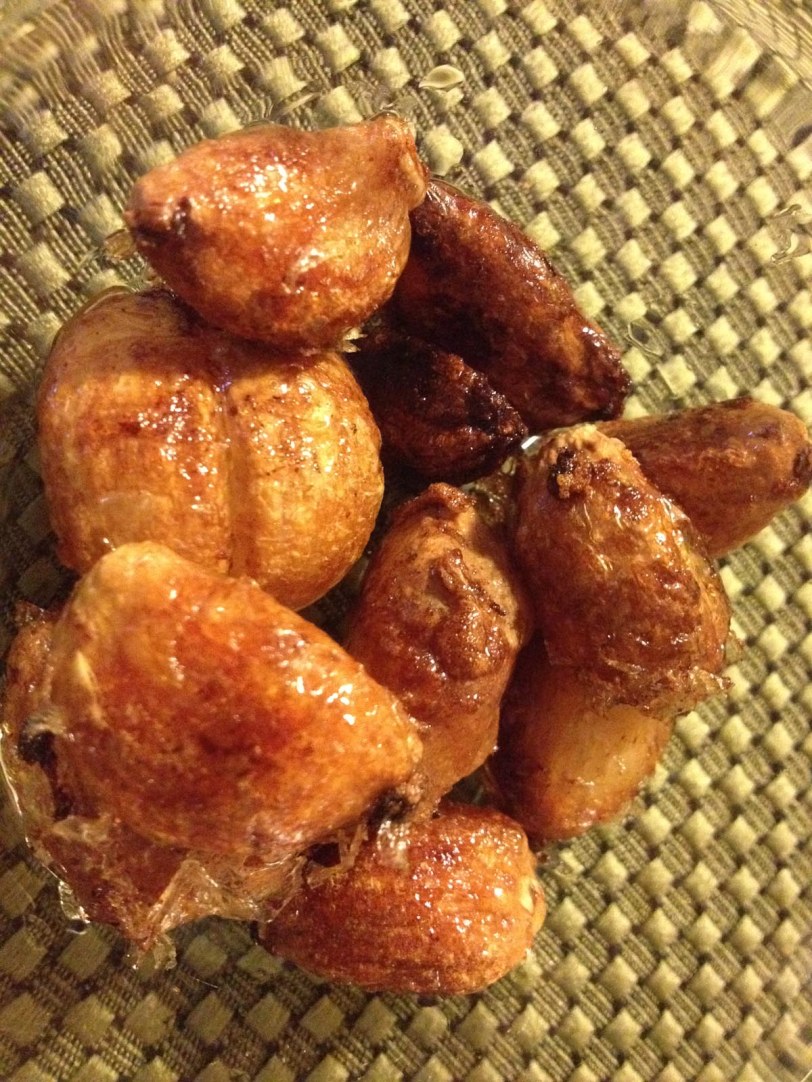 Like I said, I cheated a bit on this part. I bought this Marinated Grilled Eggplant and Zucchini from Trader Joe’s. It’s already marinated and ready to go in the oven! 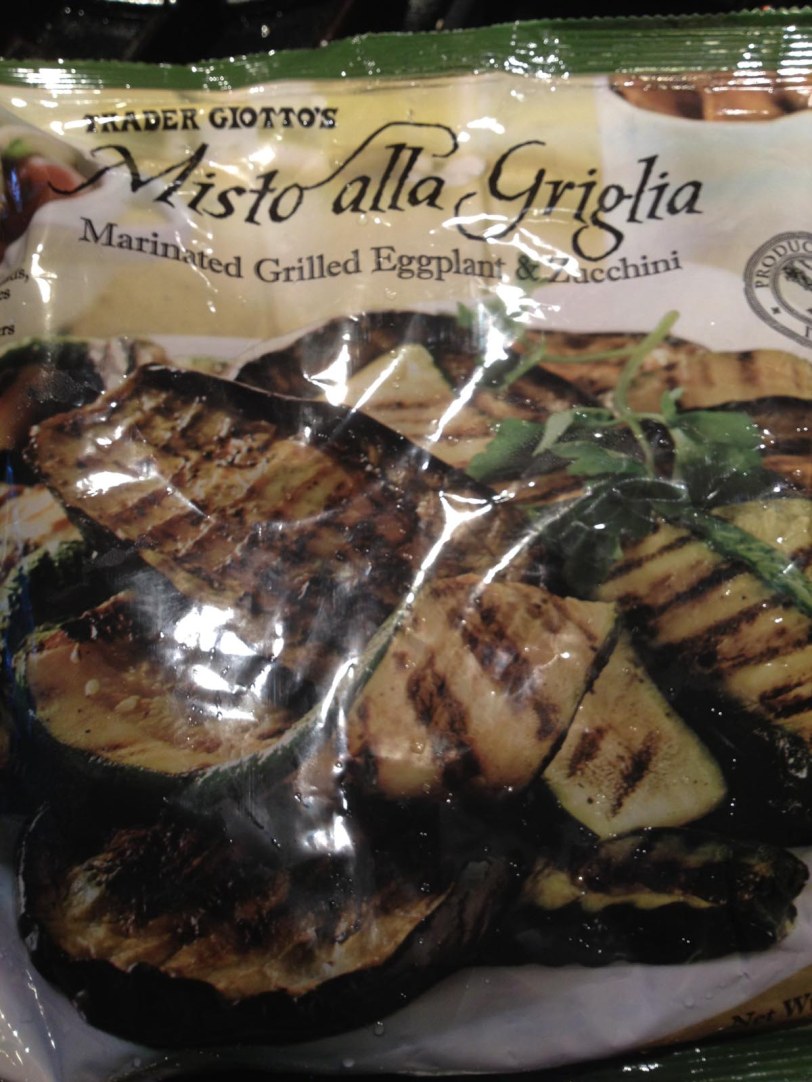 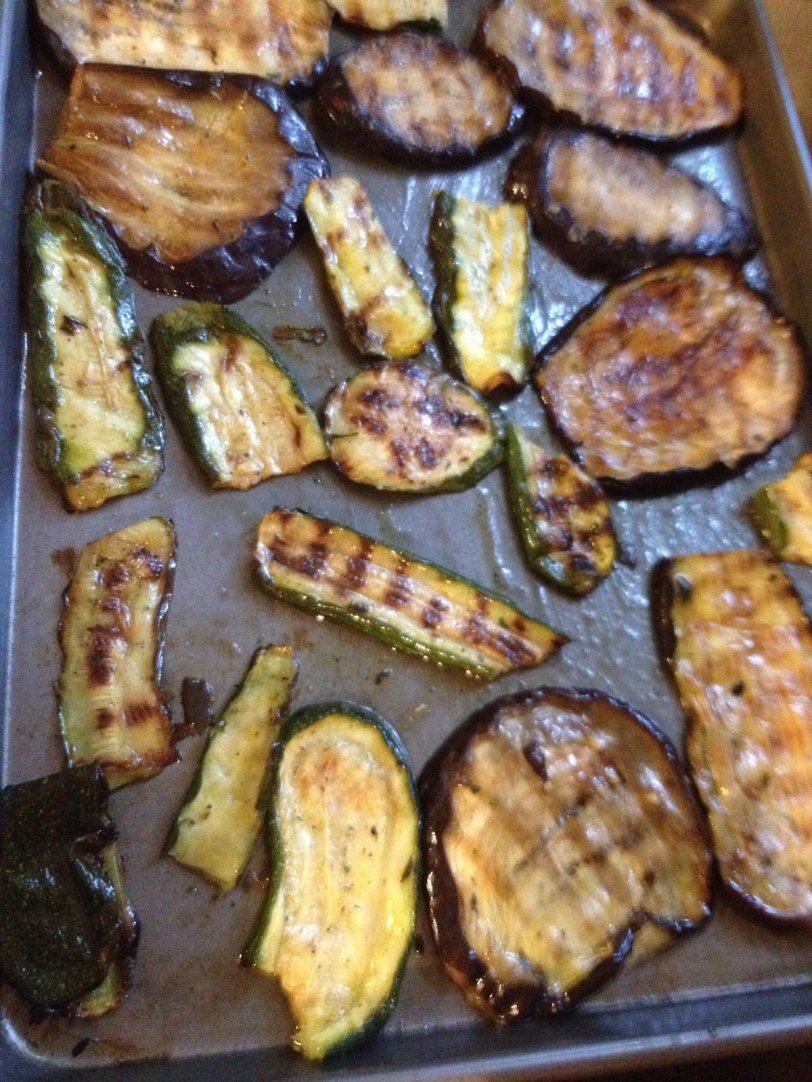 Next is the garlic sauce! (so strong and pungent, it needs an exclamation point!) This is my version of a garlic sauce from our favorite Lebanese restaurant in Monterey, CA, called Tabouli’s. It’s so simple, just add mayonnaise, fresh minced garlic and paprika! 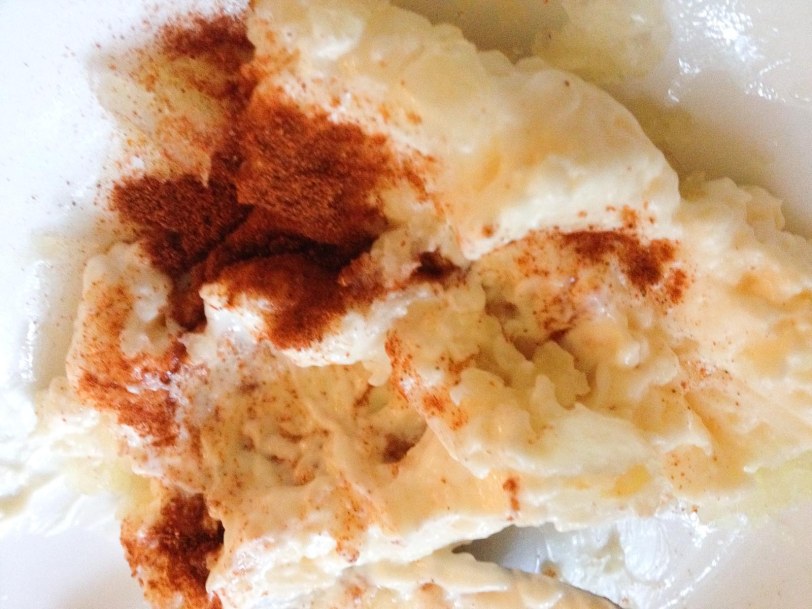 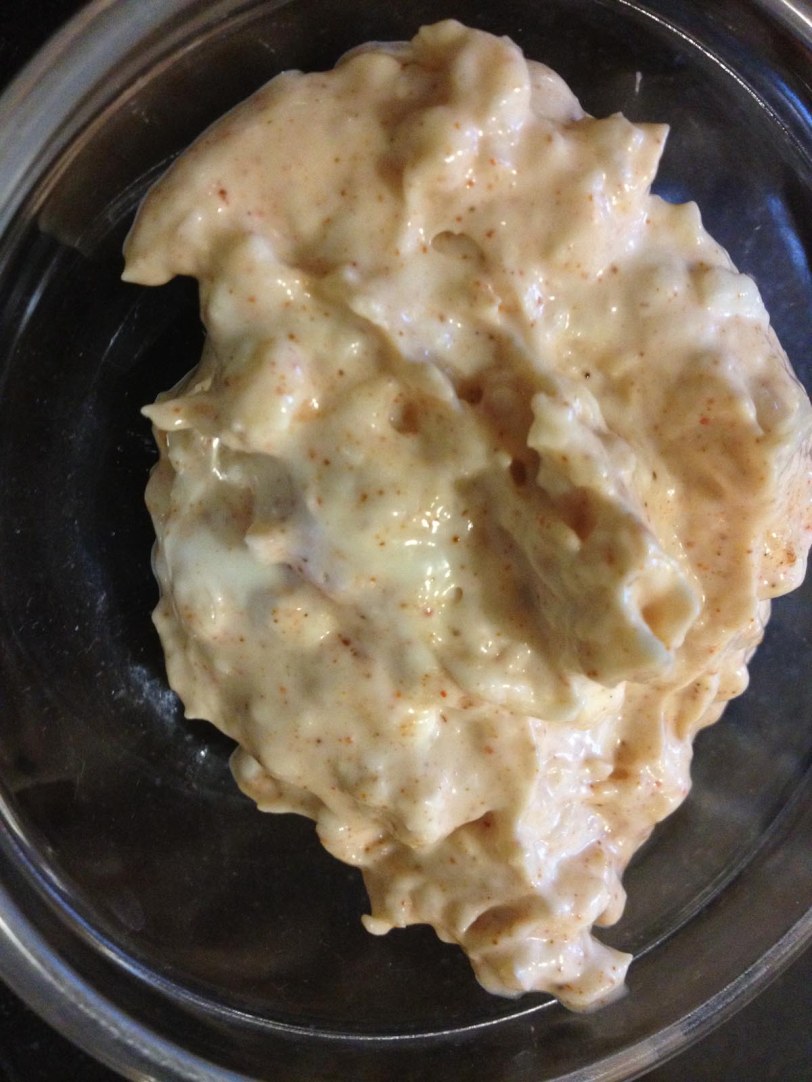 I just realized I don’t have pictures of my cooking the chicken! Boo to me! Use the olive oil you used to fry the garlic for the chicken.

For tonight’s dinner, I already had some hummus from Trader Joe’s so I didn’t need to make it from scratch. But if you don’t have any around, it’s so easy to make your own as well. 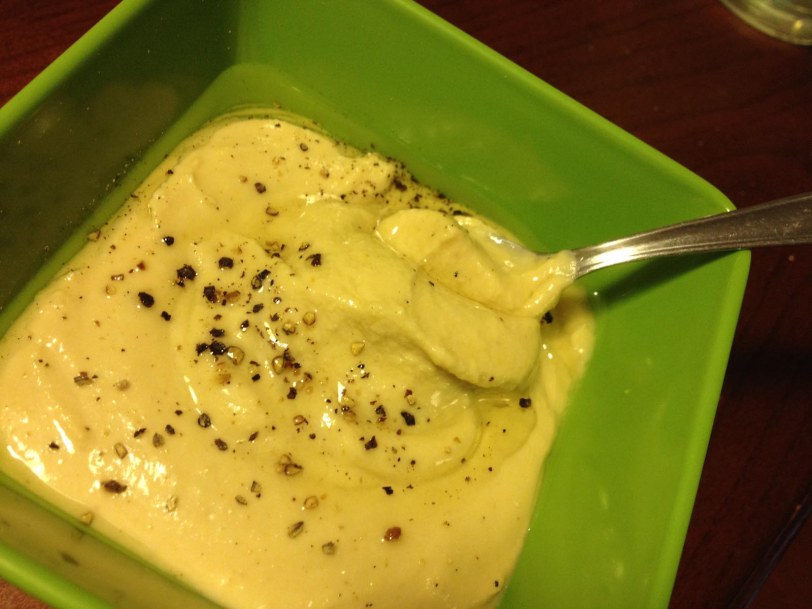 And finally, put everything together on a nice plate, and there you go. 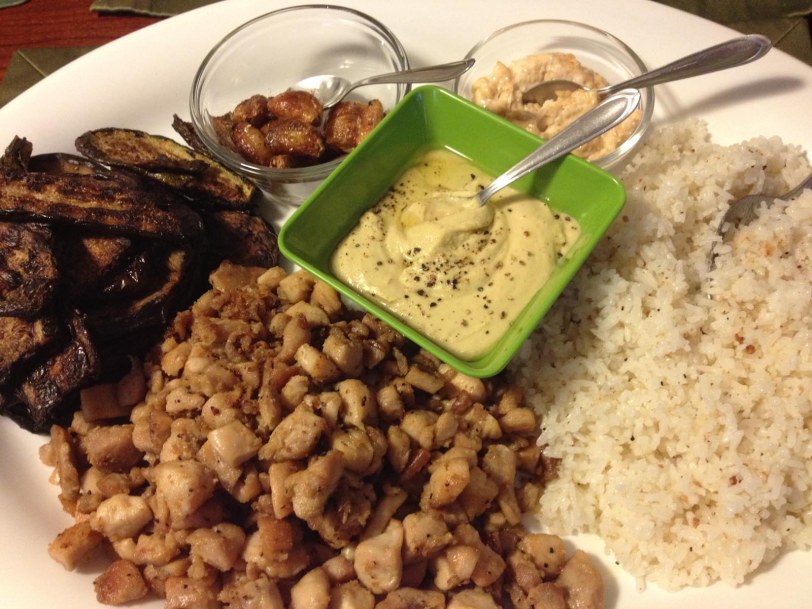 Make crisscross slashes in the flesh part of the eggplant halves and place, cut-side down, in a container. Season with salt and pepper, and pour a mixture of garlic, olive oil and parsley over eggplant. Cover and marinate at room temperature for 2-3 hours. Preheat oven to 350 degrees. Spray cooking sheet with cooking spray or grease with olive oil. Place marinated eggplants cut side down on the baking sheet and roast in the oven for 45 minutes. Remove from oven and turn the eggplants over. Baste with the cooking juices and sprinkle with lemon juice. Return to the oven for cook for 15 minutes more. Can be served hot or warm.
——————————————————————————-
Hummus
(recipe for two)

Traditionally, chicken shawarma is made by slicing pieces of marinated chicken from a spit and placing inside a pita. Other meat variations include lamb and beef. This recipe leaves the pita out and instead uses rice pilaf as its accompaniment.

Cut chicken into bite size cubes. Season with salt and pepper. Add a liberal amount of paprika, basically until the color turns slightly red. Let sit for 20 minutes or more. Heat olive oil in a pan using medium to medium high heat. Saute chicken in the oil until brown. Serve with the rice pilaf.
——————————————————————————-
Rice Pilaf
(recipe for two)

Who needs to overcomplicate things? Make the rice and noodles ahead of time and make a Lebanese “fried rice” right after cooking the chicken shawarma.

Break apart and crush dried noodles. Add to rice before cooking in a rice cooker. Once the rice is cooked, remove rice and let sit at room temperature for about an hour. After cooking the chicken, leave the “crunchy goodness” in the pan. Heat pan to high heat and add more olive oil. Add rice and stir fry at high heat for a few minutes. Add some parsley toward the end.
——————————————————————————-
Paprika Garlic Sauce
This is our favorite garlicky sauce to eat with the chicken and the rice. I cheat a little bit by using already made mayonnaise.

Add garlic, mayonnaise and even paprika to change the color of the sauce. If the sauce is too thick, add a little bit of olive oil.