The kids were in the back of the car, jam packed with so much energy after going to a family fun day at my son’s preschool.

They said they wanted to go home. My husband and I, however, had other plans. We wanted to go somewhere for lunch, but where? IndAroma, he says. The kids, still wanting to go home, had to be talked into going. All it took was one word: NAAN.

This is only our second time at IndAroma, an Indian bakery and cafe. They have most of dishes you’d find at any Indian restaurant, but they also had yummy desserts, along with sandwiches and wraps.

My husband and my daughter ordered Butter Chicken, his was spicy – YOWZER! – and hers not, and my son got the naan pizza (not pictured). I decided to try a new item on their menu: Tandoori Chicken Wings.

The Butter Chicken comes with rice and naan, and really, there’s not much to say, except that it is really, REALLY good. If you can handle the heat, definitely get the Spicy Butter Chicken.

The Naan Pizza, however was just “meh.”. My kids didn’t really like it too much. It had so much cheese and sauce that was hard to taste the naan. My son mostly ate the regular naan that came with my husband’s meal.

The Tandoori Chicken Wings were really good. It was a little tricky and messy eating chicken wings while feeding your baby naan, but I pushed through! 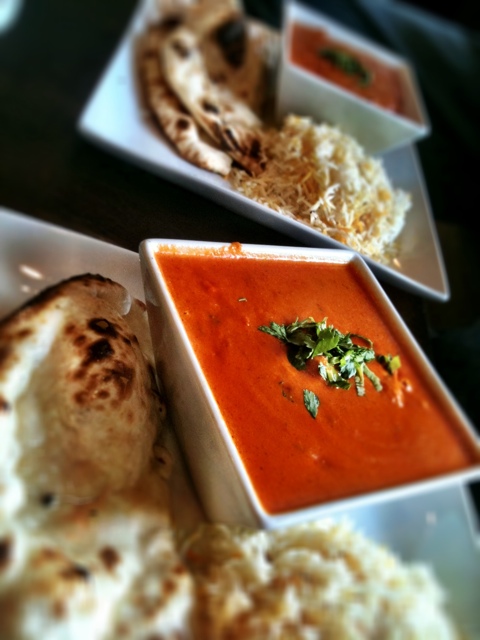